Forever 5. Forever in our hearts. 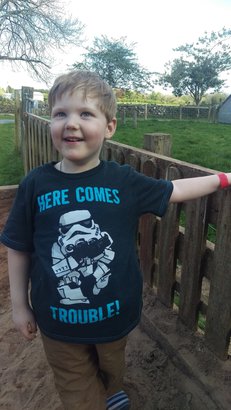 Our beautiful baby boy arrived February 28th 2012. Ronan was a fun loving thrill seeker from a very early age. He never wanted to go on the baby slide in the park, always wanting to climb the highest one with his sister Katie instead. By 15 months his little ride-on car, which most toddlers are content to push, became Ronan's first high speed thrill as he freewheeled down the hill on our drive, skillfully navigating 2 bends before using his heels to brake. He was a mischievous character too and loved hiding things, especially car keys in the most unimaginable places. He found the search that followed, very entertaining.

By the time Ronan was 2 years old it was clear that there would never be a dull day with him. He was into and on top of everything, a really energetic little boy. While he kept you on your toes he was a joy to be around. He also had a very soft side and loved giving hugs and kisses. He always had a very gentle way with younger children and babies.

In Oct 2014 when Ronan was just 2 and a half he began having what we thought were night terrors. We had him checked out by the GP who assured us that night terrors were very common in boys aged 2- 4 and he should grow out of it. At this time his temperament changed too, which we dismissed as ‘terrible twos’. All children have temper tantrums or so we thought. Christmas came and the night terrors continued. Ronan became ill with a chest infection and asthma but we weren’t concerned as he was prone to them in the winter. He saw the GP, was given antibiotics and inhalers and we thought nothing more of it. At the end of January Ronan complained of a pain in his head. He again attended the GP. This time I actually told the GP that I thought he had a brain tumour. He examined Ronan and concluded that he had a sinus infection which could account for the pain in his head and he was still wheezing. More antibiotics and inhalers were prescribed. The GP did add that if the pain in his head persisted or got worse then he would arrange an MRI, but Ronan didn’t mention it again. In February Ronan turned 3 but his general condition didn’t improve.  Every week he had different symptoms.

Most were explained by ENT problems... snoring, irritable, ongoing sinusitis and sleep disturbances. We visited the GP again and he felt a review by ENT was the next step. So he sent a referral letter and we waited. By the end of March Ronans fun loving self was gone, he was drooling and I had noticed his mobility seemed to be worse. April 2nd we met the ENT consultant and he examined him and said he had fluid in his ears and very large tonsils... he scheduled him for surgery the end of April. I breathed a sigh of relief and thought how silly I was for thinking a brain tumour.  This would soon be sorted.

2 days later I noticed Ronan couldn’t get up on the couch without difficulty and he was lethargic again we brought him to the GP. Again it was explained away. 2 weeks after that Ronan lost the power in his right arm and had double vision. By now I did not need a scan to confirm a brain tumour. I knew that what I had been worrying about for months was the only explanation. On April 22nd 2015 Ronan had a scan in our local hospital. The doctor explained that he had a tumour on his brainstem and that further treatment would be in Temple St Children’s Hospital in Dublin. An hour later we were in an ambulance. The fear and anger we felt at this time is indescribable. However on the journey to Dublin we decided okay we’re strong, he’s feisty. We will get him through surgery, chemo, and radiation whatever it takes. We got to Temple St. Hospital and waited an agonising 20hrs to meet with the neurosurgeon anxious to hear what the treatment plans was, meanwhile Romans symptoms were getting worse and he was started on high dose steroids.

Nothing in the world could have prepared us for what came next. 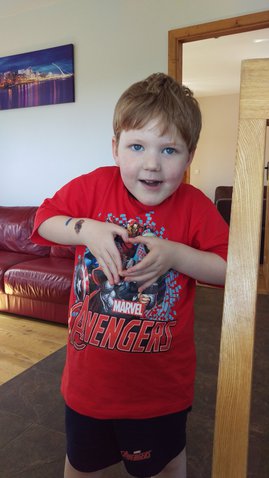 No treatment plan. DIPG is universally fatal. Ronan would likely die within 3- 6 weeks or we could try radiotherapy which may prolong his life for a few months. That was the moment in which our hearts were crushed, our lives hopes and dreams ceased to be.

The days and nights that followed were a blur of informing loved ones and searching for information about DIPG. There was nothing to give us hope. We made plans to start radiotherapy and the steroids were starting to show some improvement. Radiotherapy started the following week. Our 3 year old little boy endured daily anaesthetics and it was so hard to see him go through that not knowing if it would even work.

The radiation helped and Ronans tumour decreased but the side effects of the steroids were very difficult. Ronan confined himself to the living room and had regular aggressive outbursts. My once cuddle loving little boy didn’t want anyone to be near him. This continued for 3 months after radiotherapy. Once Ronan was weaned of steroids he was himself again. We planned holidays and had our make a wish amongst many other adventures in between hospital visits.

While we were busy making life as happy as possible during the day, the nights were spent researching, trawling through the web trying to find a glimmer of hope. The agony that came with every decision we made regarding medical treatment is truly indescribable and terrifying.

Ronan was on pain meds and CBD cannabis oil for nerve pain in his hands, feet and brow. He had weekly visits by the palliative home care team to make sure his pain was controlled. Besides this Ronan remained symptom free until March 2016 when he experienced double vision and headache while on holiday in Lanzarote. When we returned home an MRI confirmed progression. He received a second course of radiotherapy and steroids which he tolerated much better second time round.

This time the tumour only decreased marginally but his symptoms did go and we returned to making our days as much fun as possible and researching at night. We spoke with Dr Zacharoulis in Harley Street who felt clinically Ronan was a candidate for CED but the programme was not operational and he would require further scans prior to treatment. However, he did explain that the further a child is from diagnosis the less the benefit from CED. Again we went through the agony of trying to decide the best for our dying child. By now it was December 2016 and as Ronan was 18months since diagnosis we were concerned whether CED would be of any benefit. We had lots of questions and we were really undecided but sadly before we were due meet with Dr Zacharoulis again in January

2017 Ronan’s symptoms returned. An MRI confirmed our fears. So we were no longer eligible for CED.

We decided that the least invasive way to try and give Ronan the most best days, was to give him THC cannabis oil which was and is, illegal in Ireland but is being used successfully in many countries for symptom control. We did not take this decision likely or without a lot of research.

Ronans symptoms remained mostly stable until the end of May when his mobility speech and swallow began to decline rapidly. Despite this he smiled and laughed every day until 3 days before he closed his eyes for the last time on the 1st of July 2017. 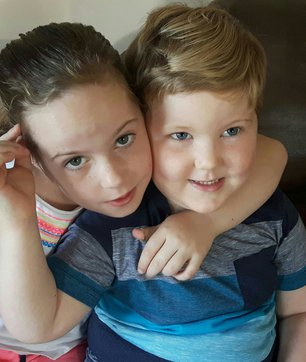 A light went out in our hearts that day and we will never be complete again.

We had Ronans tumour donated for research which is something we had to enquire about ourselves as it was not an option given by the medical team. Without tissue samples to research, DIPG will remain a death sentence, so we decided that it was something we would like to do.  The discussion Mark and I had to have regarding tumour donation made me physically ill, but I am so glad we did. I made contact with his oncologist when I noticed Ronans condition deteriorating in May.  She informed the local coroner of our wishes and then the funeral director took care of the rest.

No child should be given a diagnosis without any hope. I truly hope that Prof Chris Jones and his colleagues around the globe are able to continue their research into DIPG and that Ronan's tumour will help in the quest to find a viable treatment.