Our son, Finlay Marriott was born on June 12th 2004 and from the off, he was destined for greatness – in the eyes of his parents anyway. He was a bright, engaging, bubbly character who excelled at everything, be it in school, on the sports field or just larking about with his many friends. He had an air about him that often made us think he had been on this earth before; a quiet confidence and awareness of himself and others that often made us comment he had an ‘old soul’. He was as at home sitting quietly in a corner engrossed in a book as he was tearing about playing sport. In fact, his retreat to a quiet corner or ‘Finland’,  as we liked to call it, was one of his most endearing qualities.

Life changed for Finlay and all those who knew him in February 2013. It was the end of half term and he and his younger brother had enjoyed their usual action packed holiday:  football camps, a trip to London and seeing their beloved cousins. It was a Sunday and we noticed he had a funny turn to his head while he was drawing with his brother. Thinking it was an ear infection or something similar, we were keen to get treatment started before term restarted, and so headed off to A&E at The Royal Surrey in Guildford. A CT scan and admittance to the ward ignited fears that this was more than we imagined. 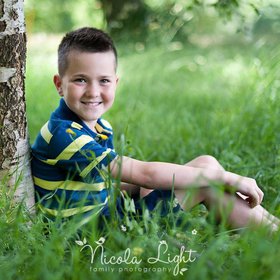 Our fears were horribly realised the next day, when we were taken into a quiet room to be told they had seen something on the scan; a shadow which was likely a tumour. A further appointment two days later at The Royal Marsden left us reeling as our consultant told us that Finlay had “The worst tumour, in the worst possible place.” His life expectancy was 12-18 months and there was little they could do. They would begin a course of radiotherapy but it would merely stall the growth of the tumour for a time.

Needless to say, our world was turned upside down. Phone calls were made, tears were shed, family and friends rallied round and Finlay, as usual, was our rock. We embarked on a course of steroids immediately and started radiotherapy the following week.  Finlay was amazing. While we were crumbling inside he was poked and prodded, had masks fitted, lay perfectly still for MRI scans and pre -radiotherapy sessions. I cannot begin to tell you how proud we were of him. He had such complete faith in us and the doctors and hope that he would get better.

And get better he did. Midway through the radiotherapy sessions, we had to wheel or carry him to the machine each day. By the end of our final week, he delighted us all by running down the corridor. I will always remember him saying, “That felt so good!” So began a period of recovery and a delightful ‘Purple Patch’.

Believe me, there were times we refused to take on board the news the doctors had given us just a few weeks before. How could this bright and vibrant boy have only months to live? It seemed ridiculous. And yet, as much as we wanted to wish that news away, we knew deep down it was true. Like any parent, we wanted to make Finlay’s time as special as possible and tapped into all our resources to make it so. We cannot begin to thank those who helped us achieve this; as Finlay said on New Year’s Eve 2013, “Mum, this year was the worst year of my life…but it was also the best.” 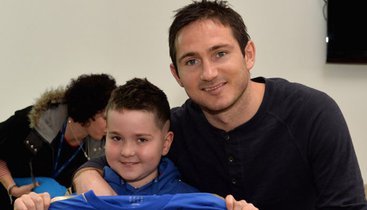 Sport was Finlay’s passion so we went to town:  training sessions at Chelsea, with lunch with the players (a cheese sandwich made by Frank Lampard no less); two trips to Old Trafford to watch Finlay’s beloved Man Utd and a surprise meeting with Sir Bobby Charlton-we even watched them lift the Champions trophy; a day out at the England training camp and a chance to meet all the players; numerous treats from the rugby world, with Saracens and Ulster leading the way; both James and Finlay were mascots and ran out onto Twickenham on two occasions; a day with the Saracens team and the chance to sit in on their team talk prior to the semi-final against Toulon; another mascot appearance, this time for the Irish football team at Wembley; golf outings to the BMW Matchplay at Wentworth , the Open at Muirfield and a round at Sunningdale with Michael Lynagh; Wimbledon tickets from the WTA with privileged access to the Players’ Lounge and umpires’ control centre…the list goes on.

We also had a huge amount of support from charities, namely ClicSargent and Starlight. Starlight came in the guise of the wonderful Bernard and his cronies who decorated the boys’ room in red and white for Man Utd and had their most prized sporting memorabilia framed for display on the walls. It still looks fantastic and James loves it.

I have to also mention the fabulous generosity of friends who whisked us away to places near and far: Mallorca for a week in June for much needed sunshine and fun; Cornwall with extended family for surfing, pool and table tennis at Halloween and a magical trip to Disneyland Paris at Christmas time.  We also spent the most perfect summer in Ireland with our closest friends and family where Finlay had the freedom to just be himself.

Returning to school in September, we began to notice some of the early symptoms returning and much to Finlay’s disgust, we were back on the steroids, those devilish pills which help ease so many symptoms but also made Finlay bloated and cranky and fed up. An MRI scan confirmed our fears that the tumour was growing again. However, after a week of getting ready to proceed with only palliative care, we were offered another short dose of radiotherapy, a chink of light at the end of a very dark tunnel. We began the treatment shortly afterwards and although Finlay was increasingly frustrated that he did not see the rapid improvements he had experienced with the initial treatment, we do firmly believe that this second dose gave us an extra precious few weeks with our darling boy.

Finlay did deteriorate after this and found moving around difficult although he still maintained his unwavering hope that he would get better…who were we to tell him any differently. We enrolled him at the local gym and he used the stationary bike and some weights to give him that much needed endorphin boost which only exercise can offer. This was the hardest part for Chris and I, as we watched him become increasingly unable to do the things he loved. It was also the hardest time for his young brother and best friend James, as his play mate could no longer kick or throw a ball with him.

We enjoyed a wonderful family Christmas with sixteen around the table for dinner and a few days full of fun and laughter. Looking back, it was the best gift the second dose of radiotherapy could have given us and those precious memories will be with us forever. After Christmas, Finlay became more unwell, with more frequent fitting episodes and he needed to use the wheelchair to get around as walking became more difficult. Whilst this was so hard to watch, I will never forget those long afternoons on the sofa watching Countdown and Pointless, Finlay still able to beat the contestants in the numbers game. He loved having his legs and feet rubbed and even Kirsty, our dearest friend from the Royal Marsden, was roped into massaging his legs when she sat next to him. 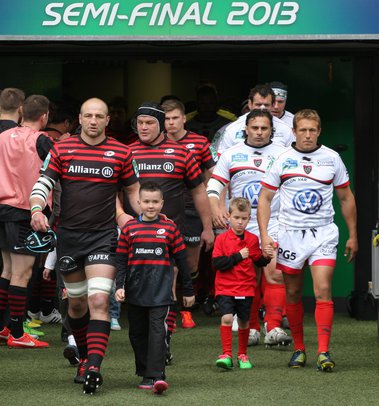 Near the end of January, Finlay complained of having some problems with his swallowing; it was becoming more of an effort and not the natural reflex which we normally have. We knew this signalled the start of a downward spiral. We had to be increasingly vigilant when Finlay was drinking and eating in case he swallowed incorrectly and food or liquid found its way to his lungs causing infection. Unfortunately, despite our best efforts, Finlay developed a chest infection. Our medical team rallied round and spent hours with us devising care plans to ensure Finlay felt as little discomfort as possible.

At this stage, he started to lose his hearing and his sight and soon after, was really unable to communicate at all. We set up a bed in the downstairs study and stayed with him, reading to him, talking with him, rubbing his legs and feet, anything to let him know he wasn’t alone. After a weekend of struggle, all his dearest friends and family made it to see him on the Monday and we all had a chance to say goodbye. He passed very gently and peacefully that evening surrounded by love.

So that is Finlay’s DIPG story. A year of our life which has made us treasure each and every minute we have with each other and taught us to never give up hope as sometimes, it is the only thing which can get you through the day. Finlay taught us that.

It is with a mixture of sadness and anticipation that we join forces with Abbie’s Army. Sadness because no parent should ever have to embark on such a journey due to the death of their child. Excited anticipation because we feel that our experiences and steely determination to make a difference for other suffering children and families, will help to combat this terrible disease.

Please visit the events page to see how you can help to raise money to support other families going through what we have gone through. Just as importantly, your support can help to fund much needed research into DIPG and perhaps, in the future, the children who are tragically struck by this cruellest of cancers will be able to hope for a brighter future.

Jude and Chris (Finlay and James’ mum and dad)