Aksel was 5 when we first noticed things were not quite right, going into lockdown he struggled with his temper and resilience, a big change from the happy easy going boy we knew.

His pencil grip changed, though he still drew the most amazing detailed intricate pictures.  He started coming through to our bed again through the night and his sleep was disturbed. All these things were put down to lockdown and the house and school move that year.

Over the next year he started to complain about his socks and shoes, and by summer 2021 was barefoot every chance he could. 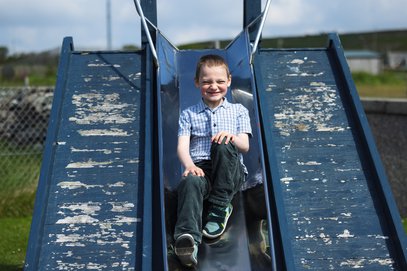 He was learning Ukulele, even opening the graduation for our Primary 7s, and his music teacher was impressed with how well and quickly he picked everything up.

He played on the beach every chance could, was learning to ride his bike and made friends everywhere he went.

Early July he was a bit under the weather and out of sorts over the weekend, we put it down to him coming down with something and kept an eye on him.

By the start of the week he was very unwell, almost as if he was drunk, staggering and slurring his words. We went to the GP.  The GP decided it would be best to send us on to the local hospital to be checked over, and so we headed home, packed a bag for a couple of nights and set off to Mainland Shetland and the hospital.

They decided it looked like there might be some inflammation on the brain, gave us anti viral and antibiotics, and arranged an air ambulance to Aberdeen. By the time we arrived his breathing was affected and he had to be intubated, a CT scan was rushed through early in the morning.

From the CT scan they could see a tumour on his brain, but it wasn’t clear exactly how it was positioned. They sent us on to Edinburgh straight away.

We arrived in Edinburgh on the 9th July, and were in Paediatric Critical Care. An MRI showed it was DIPG, and arrangements started for Radiotherapy.

His 7th birthday was spent on critical care, decorated with the birthday banners the nurses had made him during their breaks, and a constant stream of opening presents anytime he was awake enough to help watch. The first thing he asked for when he woke up was to go home. That became the goal, to take him home to Shetland and back to our house.

From Critical care we moved to Borthwick, the neurology ward, and Aksel was able to start getting out and about agin. He fell in love with his nurses, made friends and played minecraft with his pal in the bed next to him, baked a cake, and even got to visit the Helipad, a very special surprise facilitated by the Palliative care team.

Aksel was starting to struggle to breath during sleep, and as being intubated in Critical Care had caused further irritation to his upper airway, it was decided the best way to get him safely through radiotherapy would be to have a tracheostomy. Along with our training on NG tubes and feed pumps, we would now also be learning to care for the Trachy so we could take him home.

His operation went well, and they also put in a portacath, we went back to critical care. On the day he was due to have hist first trachy change, air started leaking in to his tissues and lung cavities. Emergency surgery was carried out to insert chest tube to drain the air out, and he was fully sedated again. Radiotherapy was postponed.

Eventually Aksel was able to move back up to a ward, this time we were on Dalhousie, the respiratory ward, and our training was expedited by the staff due to the circumstances. Another MRI was carried out to check on the tumour progress, as it was now 6 weeks from diagnosis. There were no major changes visible, and the bleed that was present on admission to hospital was now resolved.

The second set of Radiotherapy planning scans were now good to go!

During these weeks Aksels mobility had been slowly degrading, and he had very little moment in his left leg and completely ignored his left arm, using his right to position it. He was still playing minecraft with his brother, and playing with his toys,

He was also able to wriggle off the sats prob to wind up the staff and us when it started to alarm!

Aksel had been complaining of headaches and on the early hours of Sunday morning had an acute onset of symptoms. We returned to critical care.

Our beautiful boy was not going to be able to start his radiotherapy the next day.

We spent Sunday together as a family, with his siblings playing lego all over the floor, his pictures up on the walls and the room decorated in fairly lights.

On Monday 7th September, after 60 days in hospital, 31 in critical care, we held our peerie boy, sang songs and told stories as he gained his angel wings in a room filled with love x